Screening wild birds to understand what viruses they might carry is of increasing importance as New York lies on a major bird migratory route, the Atlantic Flyway, but there is limited information on what viruses circulate endemically in migratory and resident birds of NYC.

After collecting and screening hundreds of samples since Fall 2020, the students found that 4.1% of tested birds screened positive for avian paramyxovirus (APMV-1), also known as Newcastle disease virus. The great majority of the APMV-1-positive birds were pigeons, and one was an American woodcock. The program team also isolated two live viruses—the first ever described for the Big Apple—that can serve as domestic reference strains for future APMV-1 vaccine developments for poultry. Birds infected with APMV-1 often show no symptoms, but when they do, symptoms include becoming lethargic and reluctant to move, and having difficulty standing or holding their head upright. Despite available vaccines to prevent Newcastle disease in domestic poultry in the United States, it still remains one of the main poultry diseases in commercial and backyard chickens.

“It appears that avian paramyxoviruses circulate in NYC pigeons. While they are not harmful to humans, understanding local APMV-1 strains is important for the poultry industry and occupational safety. This virus can cause pinkeye in humans in rare cases; therefore, NYC residents should refrain from handling or feeding wild birds, and poultry and slaughterhouse workers should always be provided with appropriate protective equipment as per state public health guidelines,” says Isabel Francisco, DVM, first author on the paper.

Florian Krammer, Professor in Vaccinology at the Icahn School of Medicine at Mount Sinai, points out the important scientific implications of the NYCVH program. “This is a great initiative from a training perspective, but we are also doing real science here. It looks like the students isolated AMPV-1 strains that belong to two different lineages. This is the first such data ever recorded for New York City. This work becomes even more relevant with the emergence of highly pathogenic avian influenza virus of the H5N1 subtype on the East Coast. We need to know which viruses are present in our urban birds.“

“The concept of ’One Health’ puts forward that animals and people, plants and the environment, are inextricably connected. When a pigeon from a park is sick from environmental lead poisoning, the young children playing in the park may suffer debilitation from the same toxin. This spring, “Bird Flu” struck up and down the East Coast. By monitoring the occurrence of H5N1 in wild birds, we are safeguarding our domestic flocks and our food supply,” comments Rita McMahon, Director Wild Bird Fund.

“The present study demonstrates the role of community science as a sentinel for urban viral surveillance initiatives that potentially could detect emerging infectious disease. We need more people on the ground to help us map urban viral diversity, and there is no better way to achieve this than by co-creating a program with the community and involving them in every step” says Christine Marizzi, BioBus Director of Community Science and senior author of the paper.

Reflecting on his time in the program, Joel Gonzalez, one of the five high school student co-authors from the South Bronx, NYC, and currently at Brown University, says “Go for it. We need more people like us in NYCVH and STEM. Trust me, it will be worth it.”

And Djenabou Diallo, a senior at Central Park East High School who lives in Queens, NYC, and another paper co-author, adds “I just recently finished applying to college and am currently receiving acceptances and NYCVH made the college application so much easier. When asked about things I’m passionate about or a favorite extracurricular etc., I find myself always going back to this program.”

Generously funded by Flu Lab, which funds and advances innovative solutions to influenza challenges, the initiative ran over two years and will continue to generate actionable data on avian diseases to make New York City safer for both humans and our precious wildlife.

About BioBus
BioBus helps K-12 and college students in New York City discover, explore, and pursue science. We focus on students excluded from the scientific community due to factors such as race, gender, economic status, and physical access. Through this work, we envision a world where all people have the opportunity to reach their full scientific potential. We’ve reached 300,000 students at more than 800 schools since 2008, primarily in NYC public and charter schools and as far away as New England, California, and even Egypt and Jordan. BioBus students connect with scientists from diverse backgrounds, learn lab and research skills, practice science communication, and take steps to become the next generation of scientists and problem-solvers, making the world better for all of us. Our students access and become part of the scientific community through introductory science labs aboard our mobile labs at their schools; after school, weekend, and summer programs; and year-long internships. We offer programs city-wide with a focus on Harlem, the South Bronx, and the Lower East Side.

About the Krammer Laboratory at Icahn School of Medicine at Mount Sinai
The Krammer Laboratory studies cross-reactive antibody responses to the surface glycoproteins of antigenically variable RNA viruses. Our main focus is on influenza viruses, but we are also interested in antibody responses to coronaviruses, hantaviruses, filoviruses, and other emerging RNA viruses. Work done in the laboratory includes the expression and characterization of viral glycoproteins, generation of glycoprotein-directed monoclonal antibodies, and the characterization of the interaction between antibodies and surface glycoproteins; we are specifically interested in analyzing conserved epitopes and—through detailed studies—aim to elucidate the mechanisms by which these antibodies protect the host from viral infection and disease. The final goal is to translate these findings into novel vaccines and therapeutics.

About Wild Bird Fund
Wild Bird Fund is a state and federally licensed 501(c)(3) that cares for the injured, ill and orphaned wildlife of New York City.  Medical care includes radiographs, diagnostic testing, surgery, medication, bandaging, splinting, physical therapy, feeding and sheltering, for as many as 9,000 animals a year.  Our mission is twofold:  to provide veterinary care and rehabilitation to native and migrant wildlife so that they can be released back into the wild, and to educate New Yorkers about the rich diversity and environmental needs of the city’s precious wildlife. 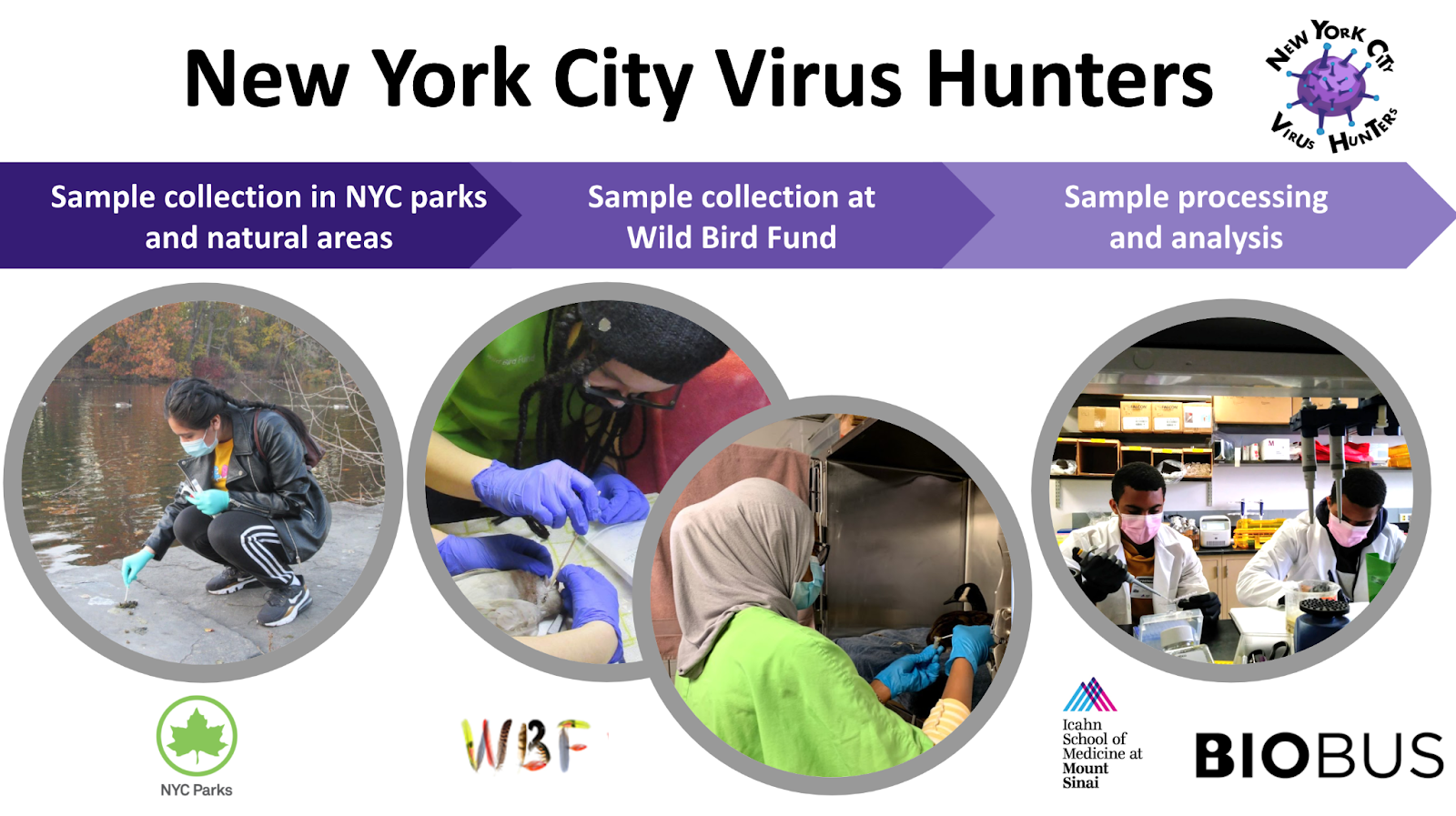